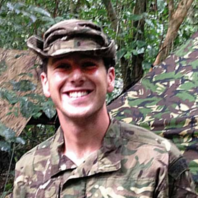 Subject: Public Services
"I was drawn to Derby College because the staff there treat you like an adult and trust you to make your own decisions."

A career in the Royal Marines

Luke Mahon has not looked back since meeting Marines as part of his Public Services course. He knew immediately where his ambitions lay – and applied to join the Royal Marines as soon as he completed his studies.

He is now a Lance Corporal, working as a platoon weapons machine gunner in a Fire Support Group – a role which demands supreme physical fitness and a need to think on his feet.

Being with the Marines takes him all over the world. He has been deployed in five African countries as well as Afghanistan, Albania, Canada, France and Germany.

Find out about studying Public Services at Derby College.