What can you do with a second language? 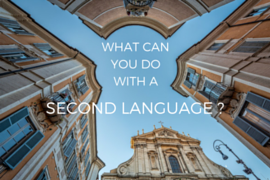 More than two thirds of adults in the UK cannot speak a foreign language, according to The British Council.

Your language skills could put you at a huge advantage in today’s global job market. Whether you’ve already got a second (or third, or fourth) language under your belt, or are considering taking a language course, there’s no time like the present.

The UK Commission for Employment and Skills’ (UKCES) has reported that UK employers have struggled to fill 17% of vacancies due to a shortage of language skills.

Your language skills are in demand. Here are just some of the industries in which you could be using them to make your mark.

From advertising for your clients in different markets, to being part of a publishing team that wants to expand its brand, there are multiple roles within the media industry where a foreign language will prove to be a very valuable skill. With an increase in technology creating greater globalisation, particularly in social media and consumerism, there’s more of a need than ever for people who are bilingual and are able to communicate across languages and cultures. Working in global media often requires you to have a deep understanding of the consumer cultures you are advertising to, not just the language, so a passion for this is a must.

You could work with refugees, asylum seekers, the environment or any number of important issues and make a real difference to the world. There are two main areas you could work in for a charity or NGO:

If you’re a good negotiator, can get along well with others and have a keen interest in international affairs, you might want to consider a job with the Foreign and Commonwealth Office (FCO) either in the UK or abroad. Your job would involve promoting and protecting British interests and citizens overseas, and providing advice and support to ministers developing UK foreign policy. You would typically be based overseas, in a country where English would not be the first language. Responsibilities can vary depending on your role and your home country but can be anything from negotiating and communicating with foreign government officials to aiding international adoptions.

Translators are needed across a wide range of industries and can sometimes save lives. If you are dealing with someone in a medical emergency that does not speak the same language as a doctor, your role can be crucial to getting the medicine they need. There are many other areas where this is also a coveted skill – lots of businesses have interactions with companies overseas so you could be a crucial cog to a business deal or relationship. Journalism is also a field where being able to communicate across language barriers, whether that be within communities in the UK, or internationally, is vital.

Although online courses and language apps can help get you to grips with the basics, there’s nothing like learning under a classroom with a qualified teacher to help you get a real understanding of communicating in another language.

Check out our language courses here. You never know where it may lead you.