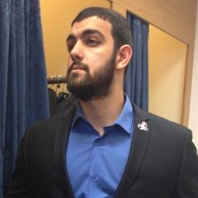 “I currently work at the Ipro football stadium in Derby,” says Zahir. “I began working there whilst at college in 2010. I started off by working as a waiter and retail assistant. After two years, I was asked to become a team leader. After this I then became a Manager, which is my current role. My responsibilities in this role include staff management, assisting team leaders, dealing with customer complaints and organising work areas for staff.”

Zahir is working at the football stadium to fund his future dream of working in the world of law.

“Since secondary school I was interested in studying law,” he said. “I chose it as an A level at Derby College and then went on to study law as an undergraduate at university. After three years of my law degree, I went on to study the Legal Practice Course.

Find out about studying A Levels at Derby College.