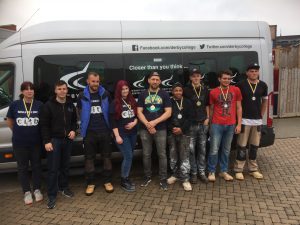 Twelve Colleges from the Midlands and Yorkshire regions entered 77 students into the different competitions which included set tasks in Brickwork, Painting and Decorating, Joinery and Plastering.

Derby College entered nine students from its Construction Academy based at the Hudson Building in Pride Park who returned home with a record seven medals and two highly commended certificates.

Plastering student Haralds Jonans (35) from Derby, who is originally from Latvia and is supported by the College’s Deaf Access Team, came first in the senior competition. He is now waiting to hear if he has earned enough points to represent Derby College in the National World Skills competition in Birmingham this November.

Rashaun Farquhar (20) is an apprentice at Derby Homes and came second in the senior Plastering competition. Apprentice Taylor Motram (16) from Kirk Hallam who works for Adam Hodgkinson Plastering won the junior competition.

Painting and Decorating student Cheryl Collick (43) from Chaddesden won a silver medal in the senior category whilst Joey Prince (18) from Derby was highly commended. Meanwhile, Nealie Harrison-Brown (16) from Chaddesden came third in the junior event.

Brickwork apprentice George Bullen (19) from Wirksworth who works for Ashbourne Builders and Kieran Parkes (17) from Alvaston won bronze medals in their senior and junior categories.

James Ford (28) from Belper was highly commended in the Joinery competition.

Derby College Head of Construction Tracey Hutchinson said: “This was a fantastic team effort between the students, lecturers and technicians who have all worked extremely hard to prepare for the competition.

“We are delighted that the quality of our Construction Academy has been showcased with such a fantastic medal tally across the board and I hope that this will inspire the other students and apprentices as well as those joining us this September to follow in their footsteps.”