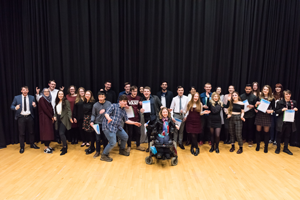 The achievements of students at the Joseph Wright Campus at Derby College have been officially recognised with a celebration evening attended by more than 100 people.

Students who have either graduated from or are continuing their studies for A levels, Creative Industries or Computer Science and Information Technology programmes based at the Joseph Wright Campus were presented with subject prizes at the annual event.

The Outstanding Academic Achievement award was presented to Harry Lebeter (18) from Ilkeston who was the first in his direct family to go to university having achieved A* in Maths and Further Maths and A grades in Chemistry and Physics.

Harry, who already had top GCSE grades from Ormiston Academy under his belt, is now studying Maths at the University of Warwick.

For her final Art project in June, Danielle was awarded the winning the annual £400 Brian Harris Bursary by the Arts Society Derby.

She impressed the judges with her design of a bee bedroom complete with specially designed and printed wallpaper and textiles – illustrating the vital role of the hardworking bumblebee to maintain an environmental balance.

Danielle is now studying for a BA(Hons) degree in Textile Design at Birmingham City University, with her sights set on a career in interior design.

Derby College Head of the Joseph Wright Centre Stacey Adams said: “Harry and Danielle were worthy winners of the two top awards of the year at JWC.

“We are very proud of their achievements and they are excellent role models for our current students.”

She continued: “The Joseph Wright Campus opened in 2005 and has gone from strength to strength.

“Last summer we celebrated an increase in the number of students achieving higher grades (A* to B) in the first A level results published since the major curriculum re-structure.

“A record 30% of A level students at the Joseph Wright sixth form centre gained the higher grades and the overall pass rate was just over 96%.  Points per entry has also increased to 27.5 compared with 23.7 the previous year.

“We are very proud of the fact that two thirds of our subjects have increased their A*to B grade performance and that we have maintained both our breadth and quality of provision since the A level reforms.

“The STEM agenda is essential to both the local and national agenda and I am particularly delighted that we saw a significant improvement in high grades in Maths, Core Maths, Further Maths, Chemistry, Physics and Computer Science.

“It has been wonderful to see the students who left us last summer and fascinating to hear how they are now doing having progressed onto university, higher apprenticeships or work.”