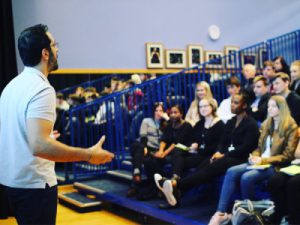 Derby-based film and television writer, director and producer Gurmit Samra returned to Derby College’s Joseph Wright Centre to inspire the next generation of industry professionals to follow their dreams.

Mr Samra was a lecturer at the College for seven years before pursuing his career in film and television full time.

His career highlights have so far included a short film ‘7 Reasons Why’ being featured at the Cannes Film Festival and the feature length film ‘Get Gone’ which was filmed in Derby.

Mr Samra advised Creative Media students at JWC to spend thirty minutes a day on their passion whether that is photography, filming or writing.  He also advocated finding a mentor in the industry and fully researching their career options.

“In the beginning work for the experience and not just the money.  Go hard and expect to work long hours.  Someone, somewhere will recognise and share your vision and want you as part of their team.

“This industry is tough as are most but like with most things in life, it depends what you’re willing to do to get what you want.

“Get that working portfolio together and showcase your work to as many people as possible.”

He continued: “As a student at college and university I wish I had been exposed to more guest speakers. These are real people in the industry who are taking action in their rapidly respective changing environments.

“Listening to guest speakers and combining that with an ever changing academic syllabus gives students a more rounded view of the industry their embarking on.”

Head of the Joseph Wright Centre Stacey Adams concluded: “We have a packed programme of guest lecturers at the College to ensure the students have a broad view of their subject and recognise the future career options available to them.

“We had excellent feedback from the students to Gurmit’s lecture ‘Making it Happen’.  They found it extremely informative and inspiring and it was great to welcome him back to the College.”