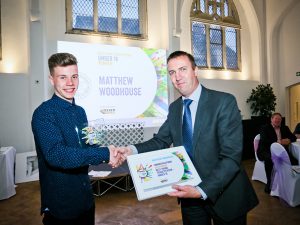 Jewson has named our Brickwork student Matthew Woodhouse as a winner in its 2017 Young Tradesperson of the Year competition.

Matthew (16) is a pupil at John Flamstead Community School in Denby and attends Derby College’s Ilkeston campus one day a week to complete vocational qualifications alongside his GCSE programme. You can discover more about our Brickwork courses by visting our wesbite.

He was nominated by his Derby College Construction tutors Bill Bentley and Clive Smith for the Jewson award and was crowned the Best Young Tradesperson under 18 after impressing the judges with his skill and passion for the trade.

Matthew said: “I didn’t think I’d be in with a chance on winning when I found out I had been shortlisted, so to be named as the winner is mind-blowing. All of the hard work has paid off and it’s great to have the recognition that tradespeople don’t often get – especially the young ones. I’m absolutely ecstatic!”

John Flamstead Community School Deputy Headteacher Helen Redhead said: “We are very proud of Matthew’s achievements in this competition and grateful to the Construction team at Derby College who recognised his potential and nominated him for this award.

“We continue to have an excellent working relationship with the College who provide valuable vocational skills for our students as part of the GCSE study programmes.”

Jewson named six winners within the competition and Matthew was the only winner from the East Midlands region. He won VIP concert tickets and £250 Jewson branch credit for materials.

Clare Harding, Marketing Services Director at Jewson, commented: “The calibre of entries we’ve received this year has been so high that picking the winners was by no means easy.

“Matthew is a fantastic example of the emerging talent in the construction industry, and the things he has achieved so early on in his career deserve to be celebrated. It goes to show that hard work and motivation can go a long way in succeeding in a construction career.”

The winners were announced and awarded their prizes at an exclusive event at the Custard Factory in Birmingham.