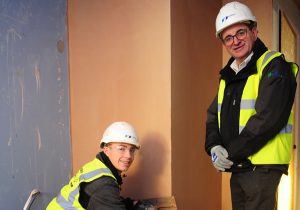 Welcoming the partnership between Horbury and Derby College, Horbury Finishes Manager Steve Coward said: “Derby College is one of the best further education colleges for plastering in the country and we are delighted to be working with the tutors to provide apprenticeships like Brad’s. “Major companies in our industry such as British Gypsum also tell us how highly they rate the training at Derby College, which is great to know.”

Brad, who is 16 and from South Wingfield, attends the Roundhouse once a week on day release and spends the rest of the time working on-site under the supervision of experienced plasterer, Paul Coward.

Since joining Horbury, Brad has worked on schemes in Yorkshire, Greater Manchester and the Midlands and is currently assisting Paul on a student accommodation project in Coventry. To encourage him further in his career, Horbury plans to enter Brad into the regional heat of the National Skills Build competition where he can showcase his plastering skills.

Brad said: “I had no idea what I wanted to do when I first left school but I knew it would be a good idea to get a trade under my belt. Working on site with Paul is brilliant. I really enjoy plastering. It is quite a skill and involves a lot of attention to detail.”

Dave Milne, Apprenticeship Manager, said: “Brad is making good progress and continuing to develop his skills in plastering techniques such as float and set and skimming. “One of the most important things when training apprentices is to make sure they are placed with the right supervisor, and as Paul and Brad have a good working relationship, Paul leaves Brad to work under his own steam while at the same time setting the guidelines for the job.”

Horbury views apprenticeships as integral to plugging future construction sector skills gaps and already employs around 24 apprentices across the whole of its £70 million turnover business. It launched its own Internal Systems Apprenticeship (iSA) two years ago to focus on all aspects of constructions systems but particularly on drylining, plastering and partitioning systems.

The group offers its apprentices the chance to progress through the business once qualified; supporting them to study for professional roles such as contracts manager and quantity surveyor.
Steve said: “We already work with further education colleges in Barnsley and Hammersmith and are now keen to further develop our relationship with Derby College. We are hoping to secure more work along the A38 corridor, stretching from Birmingham to Burton and Derby, so it makes sense to place apprentices with a college based in that region.”

He also added “Horbury is competing on a number of other jobs which went to best bids at the end of the year, and, should we be successful, we will be recruiting more apprentices. These apprenticeships would be in trades such as plastering, drylining or joinery, depending on the requirements of the contracts.”