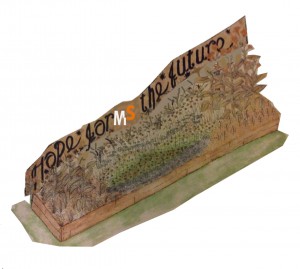 Horticulture staff and students at Derby College have teamed up with The Multiple Sclerosis Society, Derby and District Branch to create a unique plant border that will be exhibited and judged at BBC Gardeners’ World Live 2016 at Birmingham’s NEC this June.

The 5.75 metre by 1.25 metre raised border has been designed by Horticulture Lecturer Mike Baldwin and Education Support Worker Michelle Buxton with a group of five second year Horticulture students who are based at Broomfield Hall in Morley.

Inspired by the poem ‘MS’ by Rose Robinson, the border design incorporates the National MS Society colours of orange and black – signifying the highs and lows in the emotional journey facing MS sufferers.

A metal sign running through the plants spells out the message ‘Hope Forms the Future’ which will be created by Engineering students based at the College’s Roundhouse campus and is a based upon the Charity’s mission statement.

The students are currently growing a wide range of Carex, Ophiopogan, Geums and Canna’s in the greenhouses at Broomfield Hall, sponsored by Ashbourne-based Plantscape.

They will then plant the border ahead of the show which will be partly dismantled and recreated at the NEC ahead of the opening and judging on June 16 to 19.

Horticulture lecturer Mike Baldwin explained: “Some of our students have been recently involved in a work experience project at the Derby and District branch of the MS Society’s Activity Centre of Stores Road and we were keen to further develop that relationship with the organisation.

“Our entry into Gardeners’ World Live is designed to raise awareness of the work of the charity and to be thought provoking as to challenges, anger, pain and frustration facing the 100,000 people affected by the neurological condition in the UK.

“The overall message is however upbeat with light shining through the metal letters on the border and the strength of the plants rising from the earth – mirroring the enduring hope of finding a cure to this dreadful disease.

“Orange and black and are not colours that you would ordinarily see in a planting scheme so we hope that this will be eye-catching in itself both to the public and to the judges.

“We have had some great successes in previous shows such as Chelsea and Harrogate but we have not entered Gardeners’ World Live for several years so we are looking forward to returning to this event.

“Our future goal is to design a far larger garden to be entered into the RHS show that will be held next year at Chatsworth House – again in partnership with the Derby branch of the MS Society.”

Peter Milner, Chairman of The MS Society Derby and District Branch said: “I am thrilled for us to be a part of this exciting and innovative project.

“Everyone is working incredibly hard to ensure that the Garden design reflects the daily struggles faced by people with Multiple Sclerosis and the hard work done by the Charity, to help support and make a difference to the lives of people with MS and their families in Derby and surrounding areas.

“BBC Gardener’s World is a fantastic platform to help raise awareness of the condition and our Activity Centre, which provides a wide and holistic range of activities, services and therapies funded entirely by donations.

“We are extremely excited to watch the different stages of development and to see the final garden at the NEC in June.”